One well-known class of errors is called the Cupertino Effect. The effect is named after an error caused by the fact that some early spellchecker wordlists contained the hyphenated co-operation but not cooperation (both are correct while the former is less common). The ultimate effect, due to the fact that spellchecking algorithms treat hyphenated words as separate words, was that several spellcheckers would suggest Cupertino as a substitute for the “misspelled” cooperation. As the lone suggestion, some people “corrected” cooperation to Cupertino in haste. The weblog Language Log noticed that quite a few people made the mistake in official documents from the UN, EU, NATO and more! These included the following examples found in real documents:

Within the GEIT BG the Cupertino with our Italian comrades proved to be very fruitful. (NATO Stabilisation Force, “Atlas raises the world,” 14 May 2003)

Could you tell us how far such policy can go under the euro zone, and specifically where the limits of this Cupertino would be? (European Central Bank press conference, 3 Nov. 1998)

While Language Log authors were incredulous about the idea that there might be spellchecking dictionaries that contain the word Cupertino and not the unhyphenated co-operation, a reader sent in this screenshot from Microsoft Outlook Express circa 1996 using a Microsoft word list from Houghton Mifflin Company. Sure enough, they’d found the culprit. 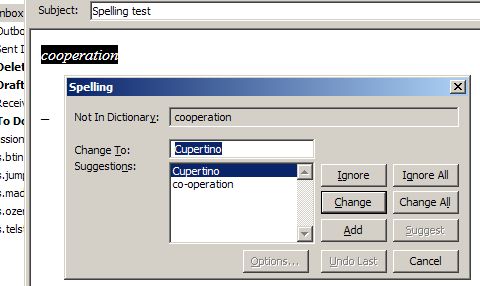 Of course, the Cupertino effect is by no means limited to the word cooperation. The Oxford University Press also points out how the Cupertino Effect can rear its head when foreign words and proper nouns are involved. This lead to Reuters referring to Pakistan’s Muttahida Quami Movement as the Muttonhead Quail Movement and to Rocky Mountain News naming Leucadia National as La-De-Da National instead. To top that off, Language Log found examples of confusion that led to discussion of copulation which make Cupertino look entirely excusable:

The Western Balkan countries confirmed their intention to further liberalise trade amongst each other. They requested that they be included in the pan-european system of diagonal copulation, which would benefit trade and economic development. (International Organization for Migration, Foreign Ministers Meeting, 22 Nov. 2004)

Of course, the Cupertino Effect is possible every time any spellchecking correction is suggested and the top result is incorrect. As a result, many common misspellings open the door to humorous errors. In a follow-up post, Language Log pointed out if one leaves the “i” off “identified”, Microsoft Word 97 will give exactly one suggestion: denitrified which describes the state of having nitrogen removed. That has led newspapers to report that, “Police denitrified the youths and seized the paintball guns.” Which seems unlikely. Similarly, if you leave out the “c” from acquainted, spellcheckers frequently suggest aquatinted as a substitute. As the Oxford University Press blogs pointed out, folks who want to get aquatinted do not often want to be etched with nitric acid!

You can find parallels to the Cupertino effect in the Bucklame Effect I discussed previously. Many of the take-away lessons are the same. Spellcheckers make it easier to say some things correctly and place an additional cost on others. The effect on our communication may be subtle but it’s real. For example, a spelling mistake might be less forgivable in an era of spellcheckers. Like many communication technologies spellcheckers are normally invisible in the documents they create; nobody is reminded of spellcheckers by a perfectly spelled document. It is only through errors like the Cupertino effect that spellcheckers are revealed.

Further, these nonsensical suggestions are made only because of the particular way that spellcheckers are built. Microsoft’s Natural Language team is apparently working on “contextual” spellcheckers that will be smart enough to guess that you probably don’t mean “Cupertino” when you mean cooperation. Of course other errors will remain and new ones will be introduced.