A number of people (including the New York Times) wrote about a costly error at Brigham Young University last week that was originally reported by the Utah Valley Daily Herald. The error itself was subtle. First, it is important to realize that Brigham Young is a private university owned by the Church of Jesus Christ of Latter-day Saints (i.e., the Mormon Church or LDS for short). The front of the the Daily Universe — the BYU university newspaper — featured a photograph of a group of men who form one of the most important governing bodies in the LDS church with the heading, “Quorum of the Twelve Apostates.” 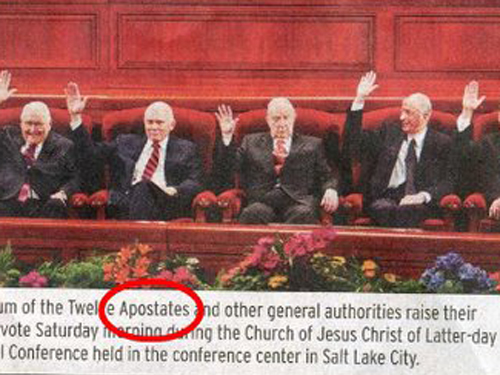 The caption should have said the “Quorum of the Twelve Apostles” which is the name of the governing body in question. An apostle, of course, is a messenger or ambassador although the term is most often used to refer to Jesus’ twelve closest disciples. The term apostle is used in LDS to refer to a special high rank of priest within the church. An apostate is something else entirely; the term refers to a person who is disloyal and unfaithful to a cause — particularly to a religion.

Shocked that the paper was labeling the highest priests in the church as disloyal and unfaithful, thousands of copies of the paper (18500 by one report) were pulled from news stands around campus. New editions of the paper with a fixed caption were produced and replaced at what must have been enormous cost to BYU and the Daily Universe.

The source of the error, says the university’s spokesperson, was in a spellchecker. Working under a tight deadline, the person spell-checking the captions ran across a misspelled version of “apostles” in the text. In a rush, they clicked the first term in the suggestion list which, unfortunately, happened to be a similarly spelled near-antonym of the word they wanted.

From a technical perspective, this error is a version of the Cupertino effect although the impact was much more strongly felt than most examples of Cupertino. Like Cupertino, BYU’s small disaster can teach us a whole lot about the power and effect of technological affordances. The spell-checking algorithm made it easier for the Daily Universe’s copy editor to write “apostate” than it was to write “apostle” and, as a result, they did exactly that. A system with different affordances would have had different effects.

The affordances in our technological systems are constantly pushing us toward certain choices and actions over others. In an important way, the things we produce and says and the ways we communicate are the product of these affordances. Through errors like BYU’s, we get a glimpse of these usually-hidden affordances in every-day technologies.