I found this beautiful and simple example of a revealing error featured in the fantastic (and very funny) Error’d series on Worse Than Failure: 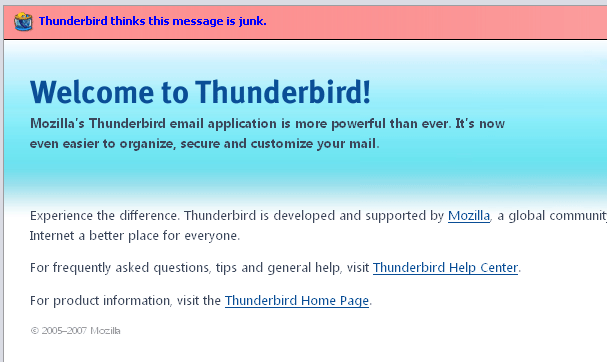 My guess is that before most users start the Mozilla Thunderbird email client for the first time, they don’t know that the software has a spam detection feature. That said, when the welcome message that automatically shows up in the inbox of every new Thunderbird user is prefixed by a notice that the message in question might be “junk,”, users’ ignorance on the matter will quickly be put to rest!

Of course, much more than the simple existence of the spam-flagging system is revealed by this error. With a little reflection, we can infer some of the criteria that Thunderbird must be using to sort spam or junk from legitimate email. Most mail systems, including Thunderbird use a variety of methods which, in aggregate, are used to determine the likelihood of a message being spam. Thunderbird’s welcome message is not addressed directly to the user in question and it makes extensive use of rich-text HTML and images — both common characteristics to spam.

Central to most modern spam-checkers is a statistical analysis of words used in the content of the email. Since spammers are trying to communicate a message, a prevalence of certain words and an absence of others is usually sufficient to sort out the junk. Sure enough, the Thunderbird welcome message is written using rather impersonal and marketing-speak terms that would be less likely in personal email (e.g., offering “product information”).

While this simple error can teach Thunderbird users about the existence and the nature of their spam-checker, it might also teach the folks responsible for the Thunderbird welcome message something about the way the their messages might seem to their users.

This error was revealed and written up by Karl Fogel.

Yesterday I received email from a hotel, confirming a reservation for a room. But it wasn’t meant for me; it was meant for “Kathy Fogel” (whom I’ve never met), and was sent to “k.fogel@gmail.com”.

Now, I do have the account “kfogel@gmail.com”, but I’d never received email for “k.fogel” before. As I’d always thought “.” was a significant character in email addresses, I didn’t see how I could have gotten this mail. It turns out, though, that Google ignores “.” when it’s in the username portion of a gmail address. My friend Brian Fitzpatrick knew this already, and pointed me to Google’s explanation. (I learned later that others have been suprised by this behavior too.)

So the error revealed a feature — at least, I’m fairly sure Google would consider it a feature, although the exact motivation for it is still not clear to me. It might be a technical requirement caused by merging several legacy user databases, or it might simply be to prevent confusion among addresses that only differ by dots.

Anyway, I called the hotel, and eventually managed to make them understand that I had no idea who Kathy Fogel was, and that I’d accidentally gotten an email intended for her. They said they’d resend, and of course I said “Wait, no, it’ll just come to me again!” But they swore they had a different email address on file for her, and indeed, I haven’t gotten a second email.

Which raises another question: how did they send the mail to “k.fogel@gmail.com” in the first place? Clearly, Kathy Fogel cannot have that address, because Google will not allow any other “dot variants” of an address to be registered after the first. (Besides, if she did have that address, we’d be getting each other’s mail all the time, and we’re not.) It’s also unlikely that she mistakenly given them that address herself, since they already had another address in place by the time I called.

A computer wouldn’t substitute domain names in an email address like that. The only thing I can think of is that somehow, humans are, at least in some cases, intimately involved in sending out confirmation emails from DoubleTree hotels. I say “intimately” because this was no mere cut-and-paste mistake. Someone had to transcribe an email address by hand, and accidentally put “gmail.com” where the original said “yahoo.com” or “aol.com” or whatever.

I hope Kathy has a nice trip.